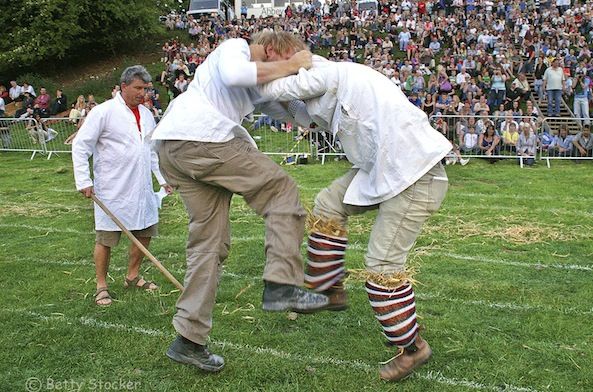 There are many different kinds of combat sports popular all over the world and shin-kicking is one of them. As a combat sport, shin-kicking involves two people kicking each other on the shin with the idea being to get their opponent down onto the ground. The martial art was developed in England and today is a popular event, with there also being the World Shin-kicking Championships drawing millions of spectators.

Shout out ‘Enough’ to end the round

This has to be of the strange sports of the world because who can want their shins to be kicked to smithereens while both participants hold on to each other’s collar. Funny sports like this even go as far as the contestants wearing weird attire. In the Cotswold Olimpicks, the contestants wear white coats. The contestants kick the shin with the idea to inflict so much pain that the opponent eventually cries out in pain ‘Enough!’.

Straw is provided to protect the shins

As one of the funny sports of the world, competitors wear long pants and have to try and protect their shins. Some people stuff straw in socks, which is actually provided, as well as the white coats. Footwear isn’t allowed to have any kind of metal-reinforcement to the toe area of the footwear or else the contestant stands to be disqualified.

Every year there are competitions

The person overseeing the shin-kicking competition is known as a stickler and modern competitions are won by the person who wins 6 out of 10 rounds. There are other rules which apply to the shin kicking and a throw won’t be considered valid unless the thrower has one foot of the ground. There are always medics attending should someone be badly injured.